By Amy Cantu
CFSA
As a result of the CFPB’s overreach with current proposed rules on short-term credit, consumers may be deprived of a lifeline when they need it most. Without access to short-term credit, consumers will be forced to choose costlier options such as overdrafting a bank account, bouncing a check, or turning to unlicensed, unregulated lenders.
Since its founding, the Consumer Financial Protection Bureau (CFPB) has embarked on a prolonged campaign of unmitigated governmental overreach into nearly all aspects of American society and the U.S. economy.

The CFPB, an unaccountable bureaucracy that has displayed a continual disregard for established laws and procedures, has relentlessly employed heavy-handed tactics to promote its activist regulatory agenda.

Government officials, trade associations, and think tanks have all weighed in on the CFPB’s penchant for massive regulatory overreach and picking winners and losers in the marketplace:

“Rather than pursue a simple solution, the CFPB instead opted for a strategy of requiring lenders to complete a thorough ‘ability to repay’ analysis prior to funding a loan. This approach may be in line with regulations governing other credit products, but it goes too far and is too complex for small dollar loans, especially from smaller lenders.” – William M. Isaac, former Chairman of the Federal Deposit Insurance Corp.
“The Fourteenth amendment of the United States Constitution allows for due process and equal protection under the law. In this instance, however, we have a conflict of these two principals [sic]. The CFPB rushed through a formal policy change while not giving affected parties the ability to comment and be heard… The CFPB is using an ‘end-around’ through their ECOA enforcement authority to regulate the auto finance business.” – Rep. Ed Perlmutter (D-CO)

“The CFPB undoubtedly remains the single most powerful and least accountable Federal agency in all of Washington. When it comes to the credit cards, auto loans and mortgages of hardworking taxpayers the CFPB has unbridled, discretionary power not only to make those less available and more expensive, but to absolutely take them away.” – Rep. Jeb Hensarling (R-TX)

Trade Associations are Fearful of the CFPB’s Heavy-Handedness
“It’s very much a mixed bag. A lot of what they’re [CFPB] doing – I think it’s overstepping the line. They’re often treading in areas where I don’t believe they have jurisdiction. They’re pushing the envelope a little too far.” – Alan Kaplinsky, attorney and former Chair of the American Bar Association’s Committee on Consumer Financial Services

“Having an agency swimming so far outside of the very specific lane it was assigned to by Congress is an extremely serious public policy matter, and a growing number of Democrats and Republicans are justifiably concerned about the CFPB’s actions, as well as its secrecy, its methodology and its lack of accountability.” – Jared Allen, National Automobile Dealers Association 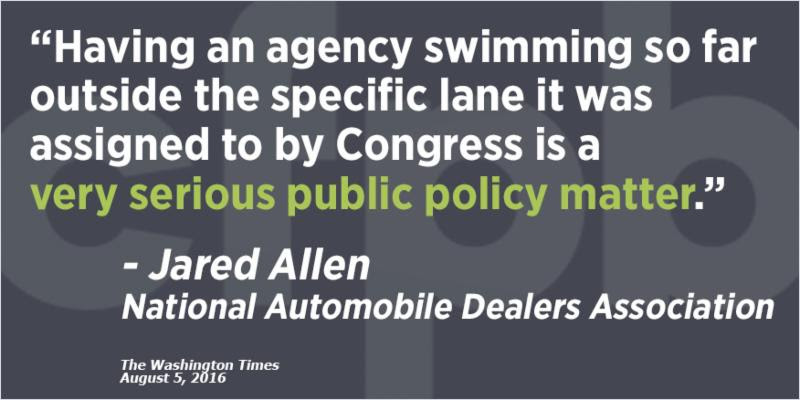 Think Tanks are Shocked at the CFPB’s Activist Regulatory Agenda
“The CFPB, under the law, has been granted a great deal of power over the financial institutions of the nation. They have the ability to cry foul on any consumer-credit product and then outlaw it completely. The fact that there is little oversight on the outlawing of products is ridiculous and gives inherently too much power to an unelected regulatory body.” – James Morrone Jr., Americans for Tax Reform

“While a more coherent consumer-protection regime is needed, consumer-protection goals often conflict with other goals, such as promoting competition. As an unaccountable bureaucracy with a single head, the bureau will be susceptible to bureaucracy’s worst pathologies: a tunnel-vision focus on the agency’s regulatory mission, undue risk aversion, and agency overreach.” – Todd Zywicki, Mercatus Center

AMY CANTU
CFSA | Director of Communications
The Community Financial Services Association of America (CFSA) is the national organization dedicated to advancing financial empowerment for consumers through small dollar, short-term loans. Now in its 16th year, CFSA was established to promote laws and regulations that protect consumers, while preserving their access to credit options, and to support and encourage responsible industry practices
703.842.2092 (o)
acantu@cfsaa.com (e)
www.cfsaa.com

CFPB Rule Will Harm American Jobs And The Economy